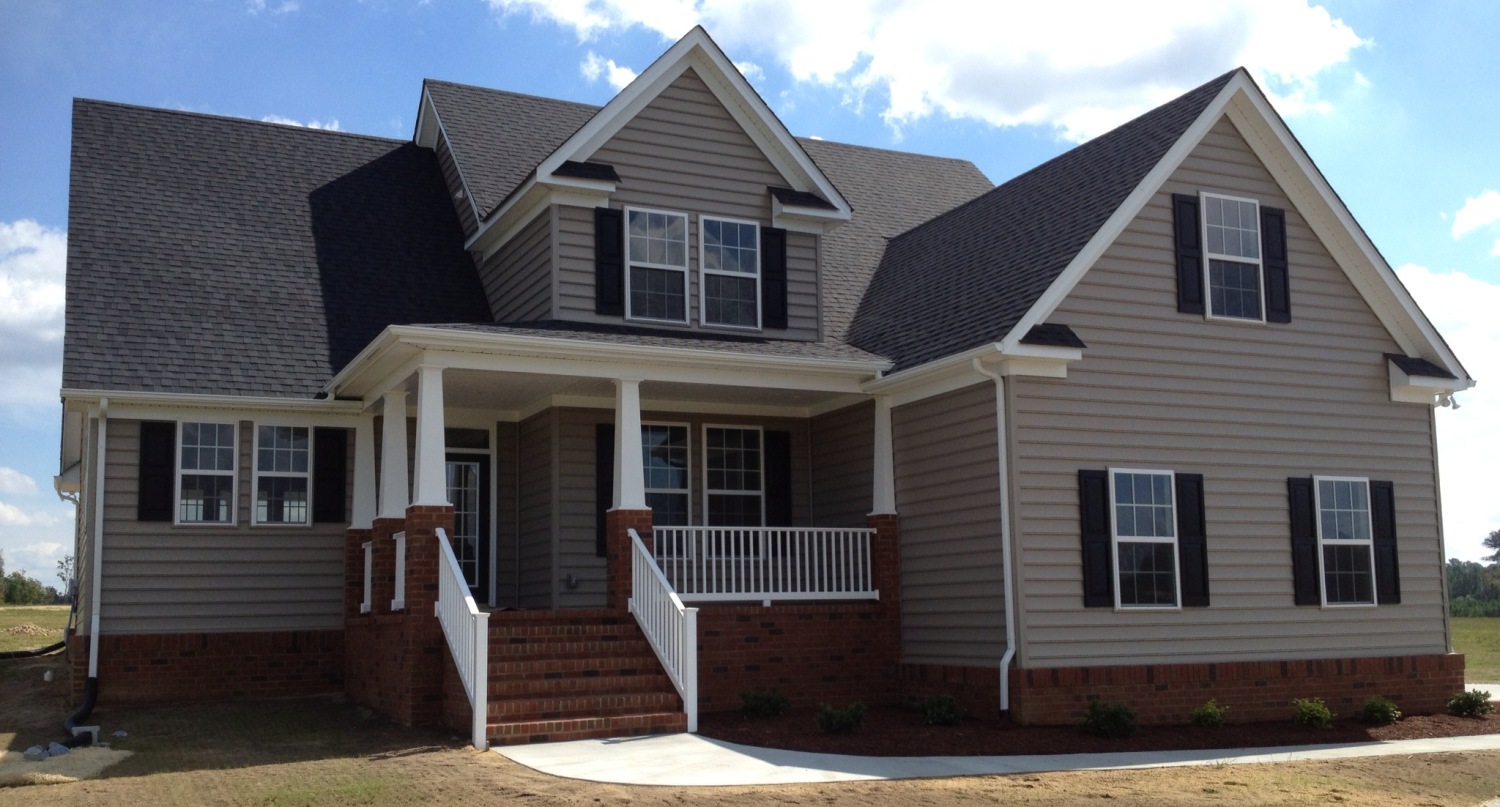 With the building season slowing down during the colder winter months, I’ve had a chance to look at some new plans for the upcoming year.  I’m needing some new plans for the Bethel Farms subdivision out in Southampton County.  We’ve been building in the neighborhood for a couple years but the plans we use don’t always have a consistent style.  Sometimes we built a more transitional look if we were building beside an existing home in that style.  Other homes were built with a more traditional exterior.

This year we’re starting with 14 new homesites that form an “island” in the middle of the subdivision.  I thought if would be a good look if the homes here had a more consistent style since their location sets them somewhat apart from the other homesites.

My Realtor, Micah Dillon, suggested something “coastal,” referring mainly to the exterior and interior colors and that got me thinking about a “craftsman” look.  For me the half brick or stone porch column bases with the large tapered posts are what makes the “craftsman” look.  There’s also the wide trim boards, gable brackets and mix of stacked stone, brick, shake, and lap siding that make up what people have come to call the “craftsman” style today.

The look I’m going for is really a mix of the “craftsman” and “traditional” style, so we can still use popular plans like the Satchwell and Cape Cod with some craftsman elements added to the exteriors.

All of the Craftsman Series plans come from W.L. Martin Designs in Florida where they mainly build on slab foundations, ours will be built on a raised crawlspace so the home will sit up much higher and look more substantial than shown in the renderings.  We will add some stacked stone to the elevations as well.  We built a W.L. Martin plan in Bethel in 2012 (the Marinette, which would actually work well in our series) and you can compare the actual house on the left verses the rendering on the right to see that the house builds bigger than the rendering. 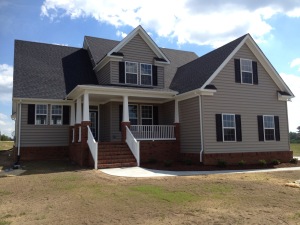 The floor plans will also be changed. All the plans will have a minimum garage size of 22’x22′ and the minimum master bedroom size will be 14’x16′.  Other rooms will be expanded as well as we work with individual plans.  Let’s have a look at the first three, The Oakdale is the plan I’m working on now for the new model home in Bethel, so let’s start there:

We’ll add some stacked stone maybe under the porch, The first model will have a side load garage.

We’ll basically be adding 2′ to each side of the Oakdale, enlarging the garage, kitchen and dining area on the left and the master bedroom and bedroom #4 on the right.  I would open the walls around the study and have decorative columns, using this room as library with some built-in bookcases.  Others may want it closed in for an office.

We’ll just add some space to the bedrooms here so that they are 12’x12′ or larger.  Will have a good amount of walk-in attic space here.

The Red Oak is the same elevation as the Oakdale but with a gabled roof line.  Add some stacked stone here as well.

Yes, this is the same first floor as the Oakdale, We’ll make the same changes as above, adding 2′ to each side of the house, enlarging the garage, kitchen, dining, master and bedroom #5.

More room for the kids upstairs in the Red Oak!

The Silverspring with side load garage.

The Silverspring is the one story version of the Oakdale and the Red Oak.  We will make the same alterations, enlarging the garage, kitchen dining room on the left and the master and bedroom 4 on the right.  The total square footage of the living area will be about 2,150.

That’s all for now.  The next two will be the Eastbay and the River Cottage if you want to look ahead.  I’d love to hear comments on the plans so far. 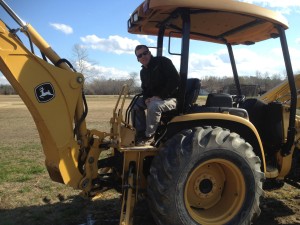 Thanks for visiting the site! 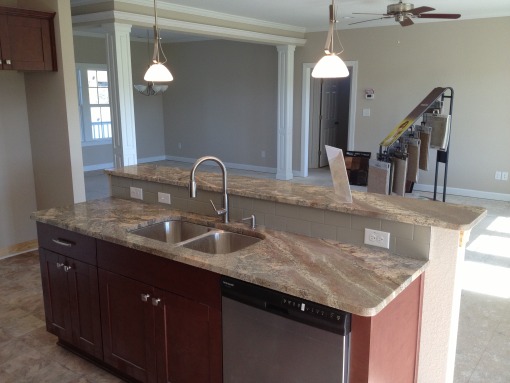 Modern, open living floor plans ready for you to preview and purchase today.

Visit us in Bethel Farms

Relax on the porch in our new neighborhood- Bethel Farms 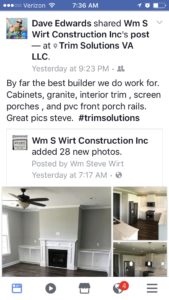 You know it’s true- I saw it on the Facebook!!

All of the homes that Steve builds are top notch. I love the designs and the colors he puts in every one. Want to go see this house live? Message me so I can go with you and get you pre-approved on the spot. Bethel Farms is a beautiful and much desired neighborhood! – Cathy Butler Pitman

Kim Veselosky Morrison: We had our house built by this awesome crew almost three years ago, and we HIGHLY recommend them! Wm Steve Wirt is wonderful to work with, and let me tell you…they do excellent work!! If we ever have another house built, he would definitely be the one to do it….he spoiled us!!
Like · Reply · 3 · January 27 at 10:42pm

Wm S Wirt Construction Inc: Thank you Kim Veselosky Morrison, your comments made my day!
Like · 1 · Yesterday at 7:49am